Message from the president

Happy New Year to all.

On January 13, Mike Block e-mailed all 2021 and 2022 members regarding the Annual General Meeting, which would normally be held on the last Thursday of January. Because of COVID, no meeting was possible, so Michael indicated to members that if they were interested in running for the Board, they should notify him and, if necessary, an election would be held electronically.

As it turns out, we received nominations for all positions on the Board, but no position was contested, so an election was not needed. The new slate of officers is:

A second issue that would normally be addressed at the AGM is approval of the 2022 budget. This was presented to the Board at the January meeting. There are no unusual capital expenses, and it is virtually identical to the 2021 budget with the exception that costs associated with the runway improvement are deleted. If anyone wants more details, feel free to contact me or another Board member.

The new Board held its first meeting on Feb 1. Minutes of the meeting are attached to this email. They will also be posted on the website.

All indications are that the current wave driven by the Omicron variant is now on the wane. New cases in Ontario are less than 20% of the 4th wave peak (2600 on Feb 1 vs. 18000 on Jan 1). It appears likely that the government will be able to stay with the planned 3 stage reduction in precautions, which means that by March 14, indoor social gatherings with up to 50 people (with masks and social distancing) will be permitted.

It therefore will be possible to restart a winter program, with a meeting on the 4th week of March. However, it remains to be seen if there is sufficient interest among club members to justify the planning of indoor events.

Discussion with the Burlington Library did not arrive at any conclusion regarding availability of a meeting room. Accordingly we have identified another venue, the parish hall of St. Matthews Church, 126 Plains Road E., directly across Plains Road from Skycraft. The room will hold 100 people so is sufficient to permit social distancing. Once we are more certain of the winter schedule (if there is one), we will firm up rental.

To gauge interest, we will be sending out an electronic survey by mid-February, assessing whether you would attend a winter meeting and assessing interest in various proposed topics. Please complete it promptly. We will compile results and then let the club know whether we will proceed with a winter program for March—May.

Summer Events
Looking ahead to summer, we are hoping to hold several events – a spring “Maidenfest” to check out new planes, summer Fun Fly, and September Corn Roast and wrapup. We will keep you informed.

Finally, I would be remiss if I did not express to Mike a sincere vote of thanks on behalf of all the members for his guidance and leadership over some very difficult years. Thanks so much!

Please read this document. These guidelines should be used at both Bayview and Bronte.

The Runway committee , consisting of Ashley Armstrong, Brian Harrington , Bill Ayre,  Barry Parkinson and Geoff Norman first started talking to The City Of Burlington on   4 th February 2020. We were able to set up a meeting with the City for 2 nd April. Unfortunately Covid 19 struck and this meeting was cancelled. Eventually another meeting was arranged for 23 rd July. The committee and representatives from the City met at Bayview Field. At this time Brian had 3 contractors all lined up for the work, all were approved to work for us by the City. The job consisted of an asphalt patch approximately 20 feet x 50 feet roughly 4 inches deep at the location of the dip in the runway some additional soil to even out the new edge of the runway.  We were told at this meeting that this was a very simple job and we would have a reply within 2 weeks.

To cut a long story short it was not until 2 nd October that we received a 14 page legal document that when we would have signed it allowed us to START the job.

Between 23 rd July and 2 nd October we had reminded the City on several occasions that we were running out of time as it was becoming too cold and rainy to lay Asphalt , fill the cracks, seal the complete runway and paint a nice straight line down the centre.

As it stands right now, we are in a position to start this work early next year as all of the necessary documents such as Insurance certificates , WSIB documents  construction schedule, original contractors are still in place. Hopefully there will be no additional demands. We will be contacting the City of Burlington early in the new year.

Peter Foto’s f35 and Eric Klepsch’s A10 beating up the field on a recent outing at Bayview. The plane is inverted, not the print. Geoff Norman 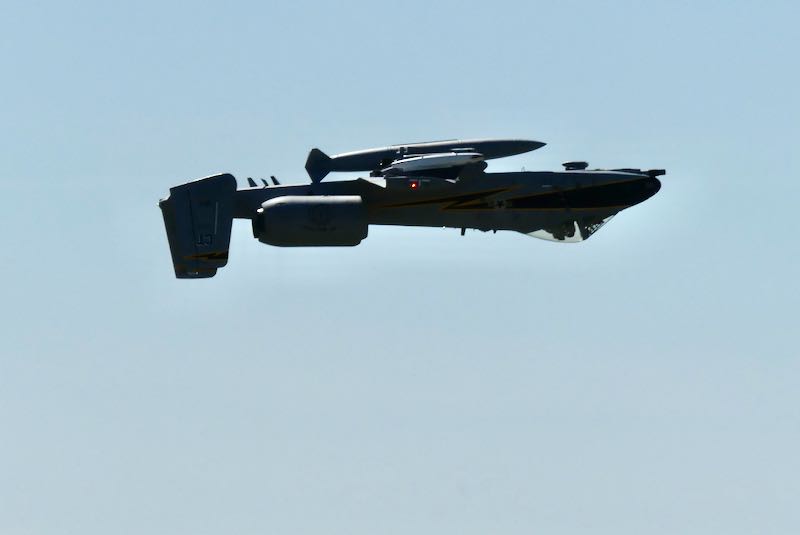 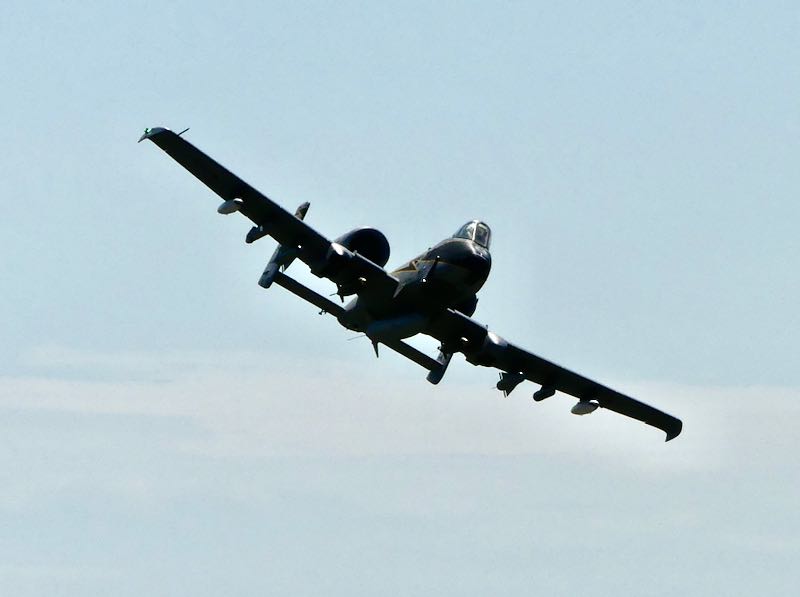 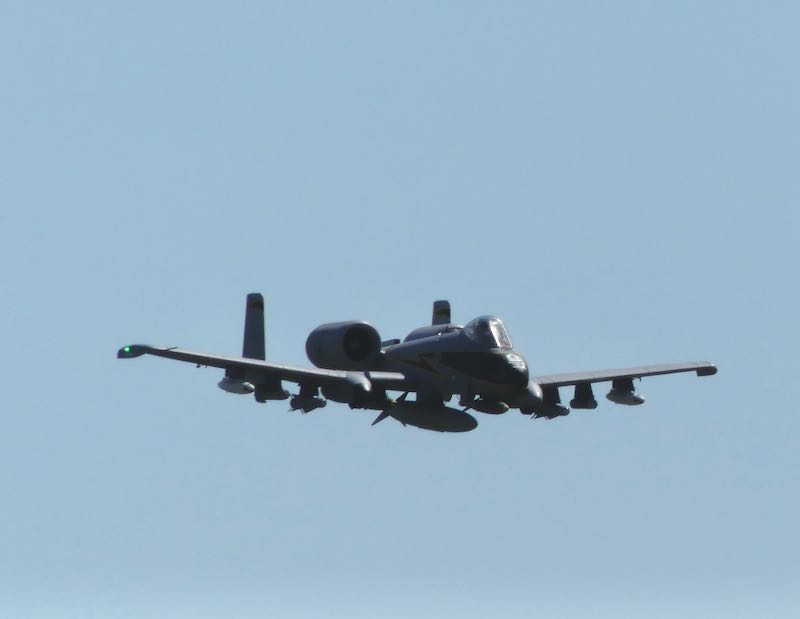 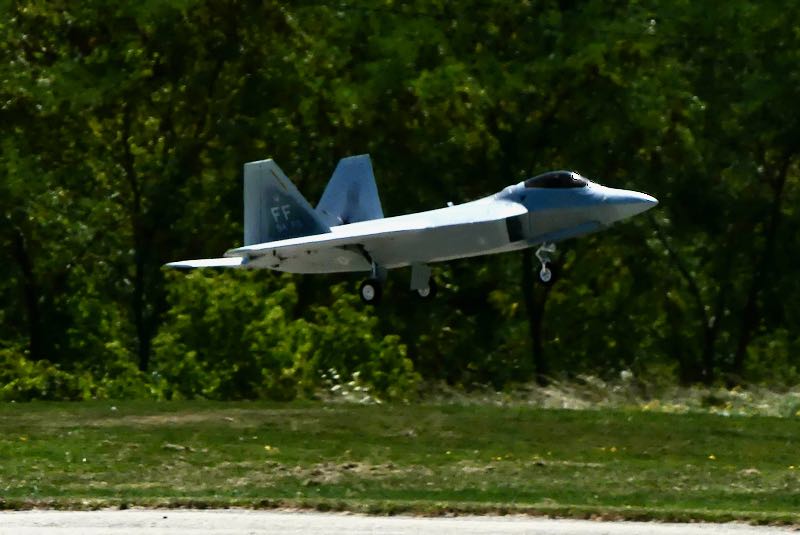 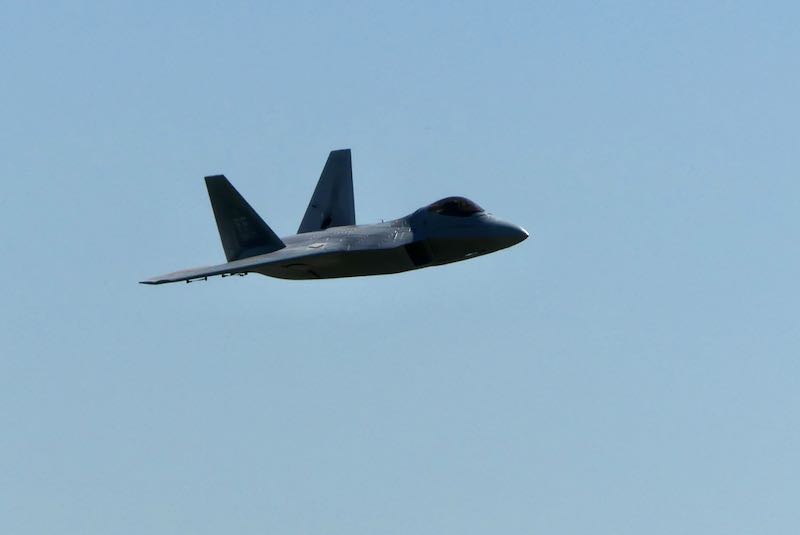 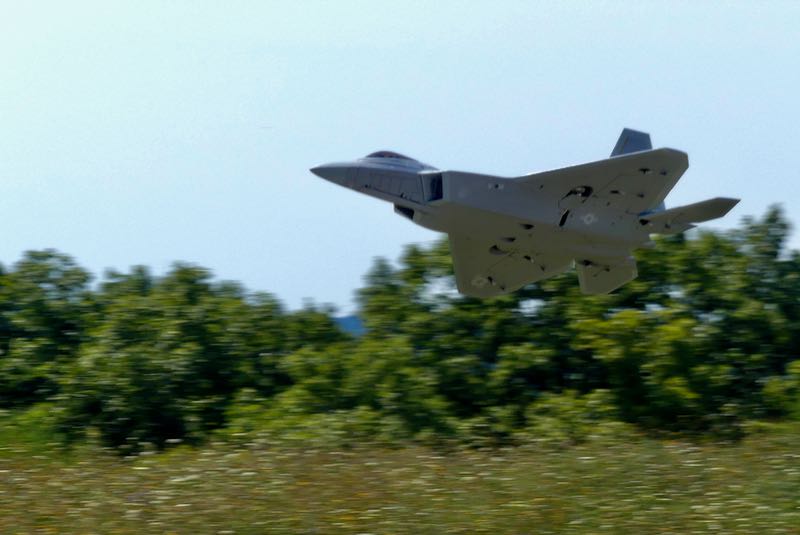 Ted Pritlove has posted an article about his Covid19 F-18 build
See the Members page.

Highlights of the February 27, 2020 meeting – Derived from the minutes

The meeting was opened at 7:00 pm. Mike Block acted as Chair of the meeting and Vic Wells acted as Secretary.

Guest: Steve Wickers was welcomed to the meeting.

Minutes: Minutes of the meeting held on January 23, 2020 were approved as circulated on motion made and seconded.

Member News: Mike reported that Geoff Norman was in isolation in McMaster hospital with pneumonia. Visitors would not be admitted at this time.

Membership: Trevor reported that paid-up membership stands at 123 which is slightly less than the number of members at this time last year. He forecasts membership to be 145 to 150 by the summer, which is also less than the yearly total for 2019.

Wings Programme: The Club needs a volunteer to manage the Wings programme. The programme is an important tool for recruiting new members. Interested members are asked to speak to Mike.

Field Improvement: On behalf of the Committee, Brian Harrington presented 5 options for improvement of the runway at Bayview that are under consideration. Options range from doing nothing (zero cost) to a modified repair (of the depression) and crack repair/sealing/painting at an estimated cost of $14,330. Estimated time frame for the work is 5 to 7 days, which may not be sequential as several contractors are involved. The Committee is working to develop more complete estimates. Several questions were addressed satisfactorily. Brian confirmed that the Committee will report back to the Club after the next meeting with the City of Burlington.

Bronte Field: Mike reported that the status of the Bronte field matter has not changed. Tom continues to communicate with Roy Rymer (ZD) and is waiting for a response. Mike is still hopeful that the issues concerning the field will be satisfactorily resolved. Several questions were address satisfactorily.

Next meeting: To be held March 26. Mike reminded all members that the May meeting will be held on May 21 and not the usual 4th Thursday of the month.

About 20 intrepid souls ventured out into the icy blasts to celebrate our annual fun fly. Truth be known, while it was certainly blasting, it wasn’t too icy. As a result most of the planes were left in the car, while we huddled in the hut knocking back hot chili, greasy donuts and endless cups of coffee and hot chocolate, courtesy of Ashley.
However for the few who ventured out from time to time, aerial entertainment was provided by Trevor Blum, bundled up in fur hat, for coat, fur mukluks and, for all I know, fur knickers. He flew a Bushmaster masterfully, making it do things that defied laws of aerodynamics. One stunt, which I witnessed, was true STOL. The thing was seen to take off after less than six inches of ground roll. (When Ashley saw this, he decided to disband the runway committee as superfluous!). The plane hovered, almost flew backwards in the wind, and gyrated all over the place. Not to be outdone, Don Larkin got his Bell chopper out to show what true hovering looked like. Additional entertainment was provided by Brian Harrington, with his F4 EDF and Ian Brown, with a Luftwaffe flying wing. Despite the weather, a very good time was had by all. Special thanks to Ashley, for providing the coffee, donuts and chili.

Foamy Repair:
Ted Pritlove has posted an article on how he repairs his foamy EDF jets.
See the Members page.

Warbirds 2019 event at Bayview was a great success! The weather was fantastic! hot and dry. We had to deal with some heavy winds on Saturday gusting almost 50 km an hour! But the flying went on to the delight of all the spectators. Sunday was the perfect day for Flying! Trevor Brum flew his 1/3 scale Stearman and his Alpha jet. What a great show he put on! I must say that all of the pilots at our club we’re flying at their best, Peter Foto, Tim Bidwell, to mention a few. We also had a few pilots from other clubs, Mississauga, and the Niagara region. The prize for best in show went to Brian Harrington for his beautiful Lysander, and he did a wonderful job of flying it to scale. I also want to thank Barry and Bob for running our barbeque and planning all food, drinks and ice purchasing leading up to the weekend they did a great job.We should all thank the members and volunteers who helped plan and execute Warbirds over the bay! Months and weeks before the event, members were cleaning barbeques checking equipment and getting ready for this event. Tony Madage and I arrived at Bayview field Friday morning before the event to find this great group cutting the grass setting up PA systems and making sure everything was going to run smooth for the weekend. Tim Bidwell, Ian Brown, Scott McGregor, Peter Foto, Tony Madage, Ashley Armstrong, Barry Parkinson, Bob Fowler, Geoff Norm and many more! It was a job well done by all! I hope we can do this event again in 2020 and make it even better.

You have to see this:

Maidenfest May 4th
About a dozen fliers and another dozen BRCM members braved the miserable weather on May 7 – cold, damp, and grey – to participate in Maidenfest, an opportunity to display the fruits of a winter’s labour. The diversity was amazing. Ashley Armstrong brought out his astonishing Me323 transport, powered by 6 nitro engines. Assembly took longer that than the build time of an average ARF. It didn’t fly, but the fact he got all 6 engines going is a cause for celebration. Trevor Blum dazzled us with his turbo F-16 at high speed.