To post your advertisement here send email to website@brcm.org

Incidentally, Peter won a cash award from Motion R/C for his incredible paint job on his new Hornet in the RCAF 150th anniversary colour scheme.

In January, 2020, I picked up Peter’s Super Hornet and began looking for other national colour schemes.  Knowing Chris Klepsch would be a good resource person, I gave him a call.  After a long chat, he started sending me pictures.  We decided my F-18 should represent the Israeli Air Force “Hammer Squadron” with an Eagles head on the fins.  I sent Chris’ picture to Callie Graphics with some minor personal changes.

And so I began.

All surfaces needed some filling, sanding and reshaping.  I used carbon fiber ribbon to reinforce weak and cracked areas.  Finally I rebuilt the landing gear boxes and cut out rudders in the fins – then off to Home Depot to purchase small containers of paint to replicate the Israeli Hammer Squadron paint scheme.  Construction and painting took approximately 10 weeks.

In June, Eric Klepsch helped set up the programming for the model and recommended other “need do” items.  On July 10th my Israeli jet got Erics’ final inspection and fine tuning before his two maiden flights.  He suggested then installed a gyro to eliminate some wing wobble, then made one more flight.  NOW IT WAS MY TURN!!!!

Rebuilding this model during our Covid lock-down was very good therapy for me.
Cheers, Ted Pritlove

P.S. Thanks to Peter Krautter for the photos and for posting this article. 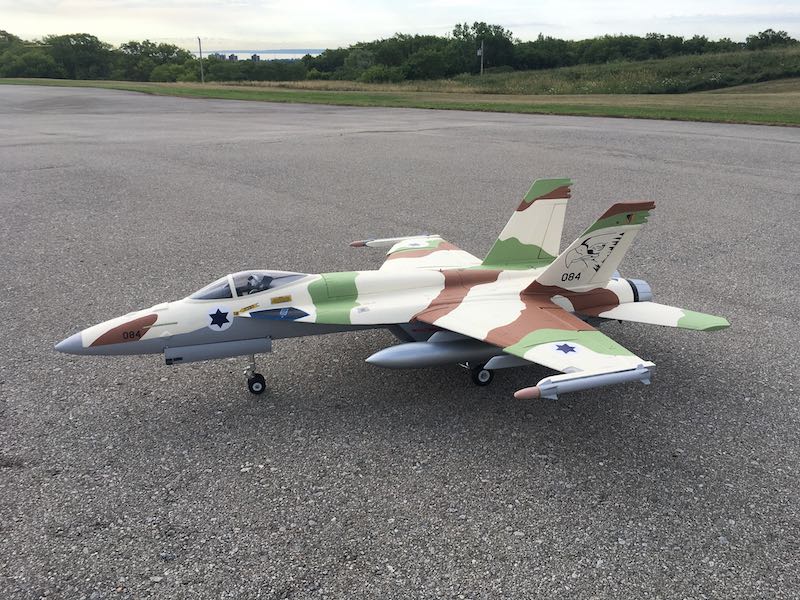 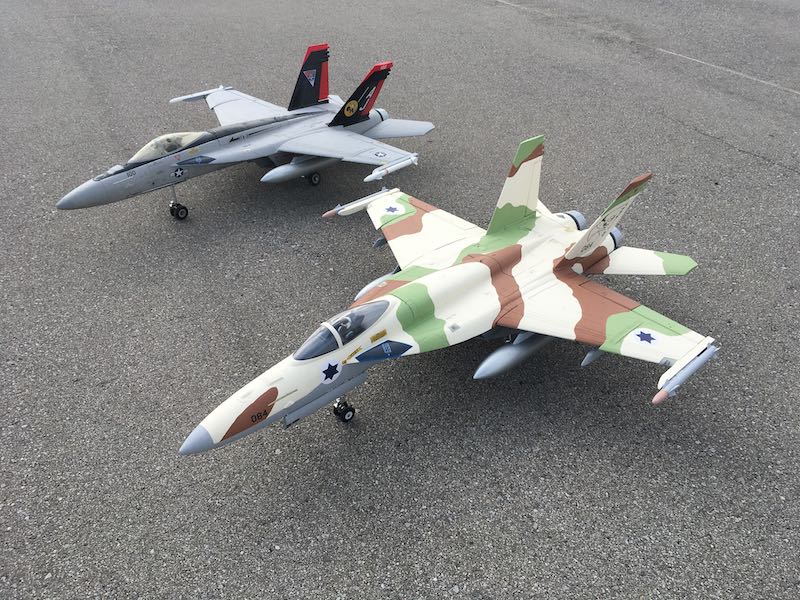 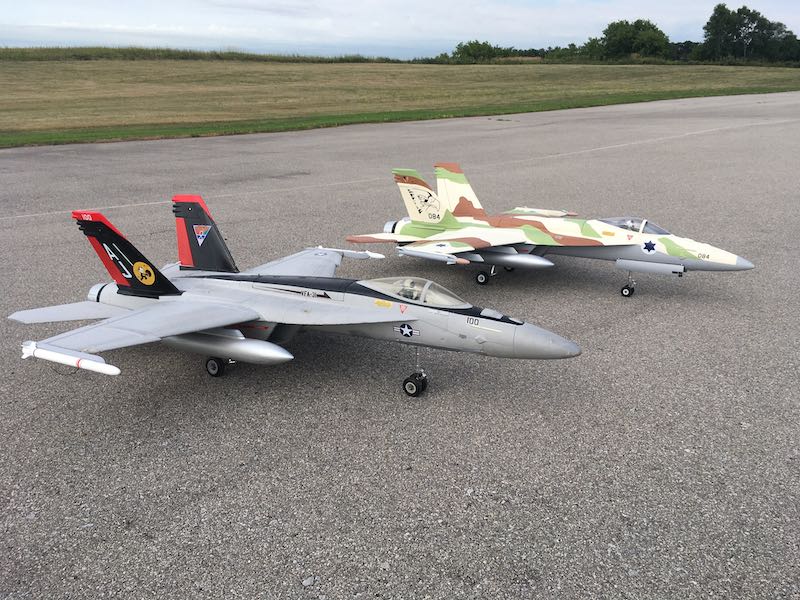 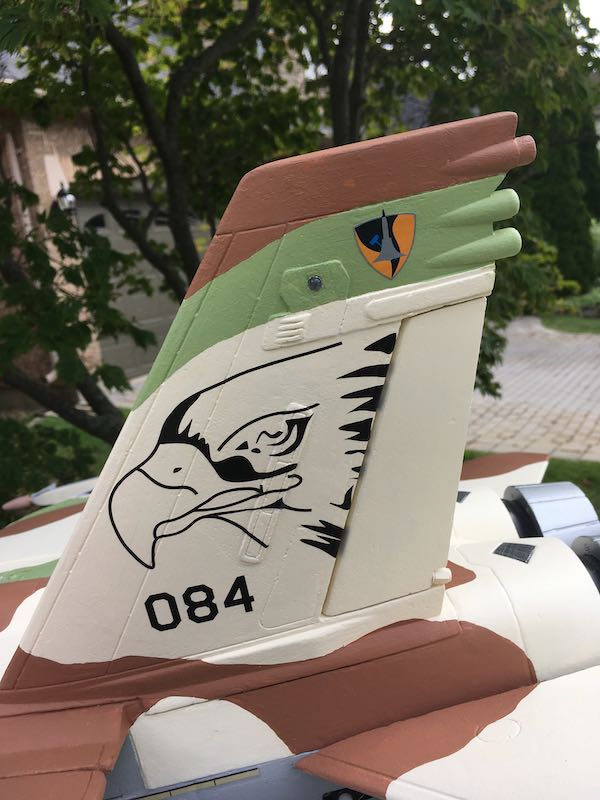 With the popularity of foam constructed models (foamies), it is inevitable that we will have structural failures. I have successfully repaired heavily damaged foamies to flying condition using the following procedure. As an example, I recently crashed my Hawker Hunter due to a premature take off and cracked the fuselage and broke off the rudder and the vertical fin.

1: Using the “hot water treatment” method, I plunged the crushed or bent parts into almost boiling water, then messaged (twisting-pulling-pressing) them into their original shape. Very hot wet clothes can also work.

2: I spread Gorilla glue on the broken surfaces. Then holding the surfaces together, I insert 3/8 in. Staple gun staples over the cracks . 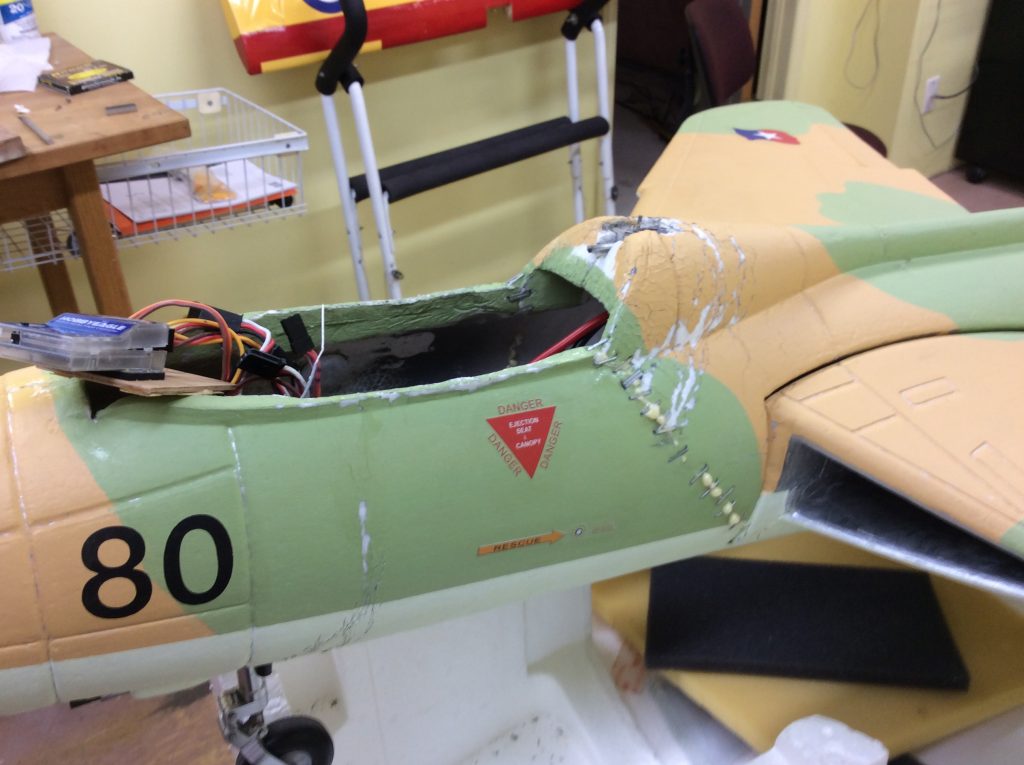 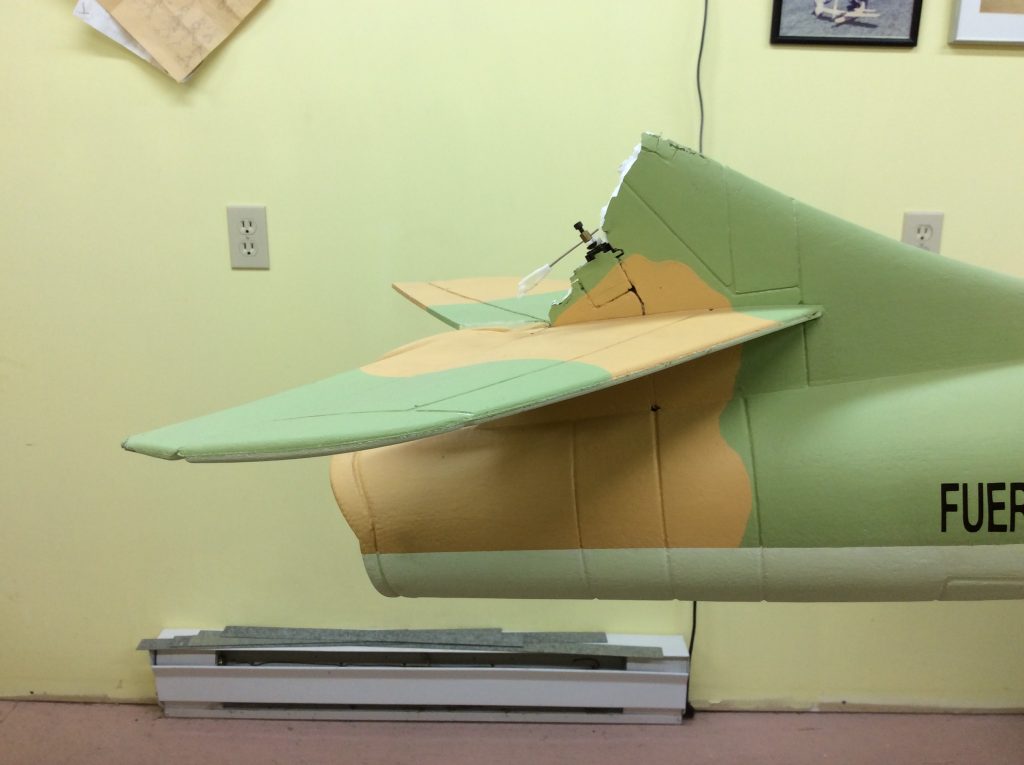 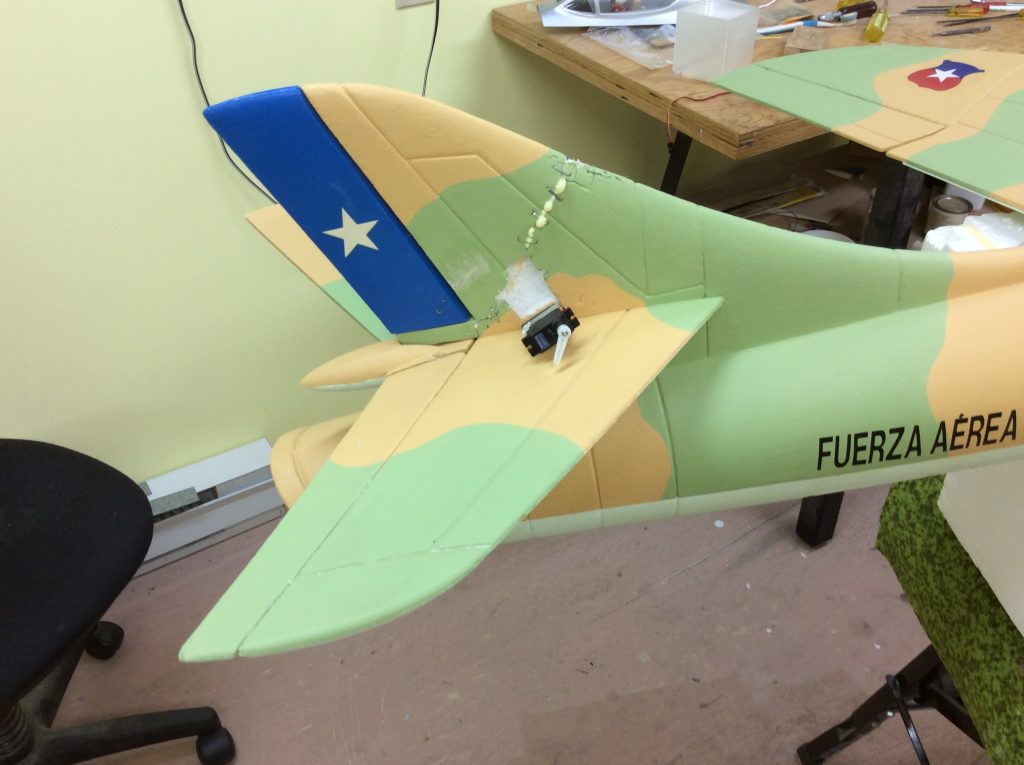 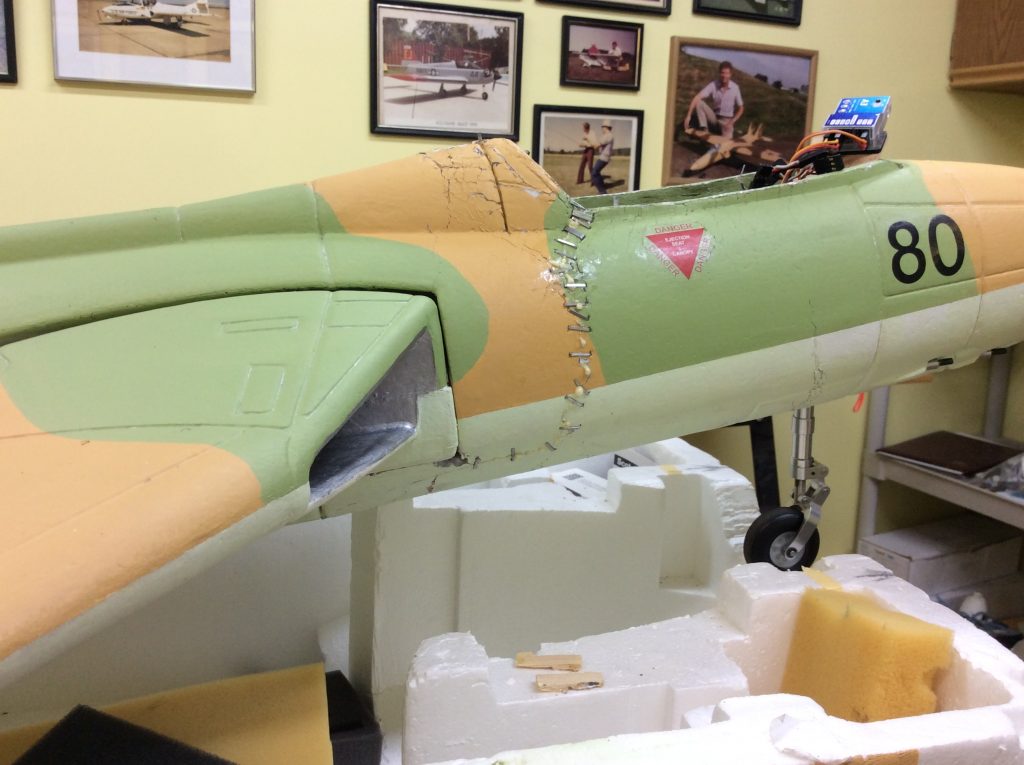 3: After the glue dries (Gorilla glue expands and oozes out of the cracks), I cut off the bubbles and sand smooth. 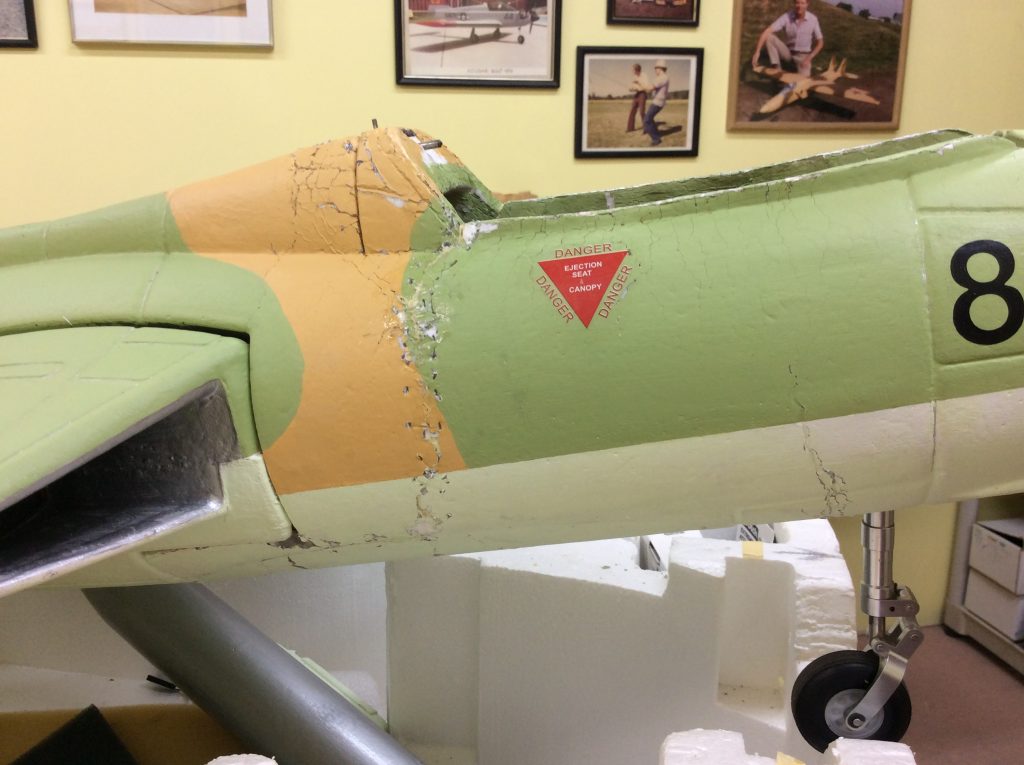 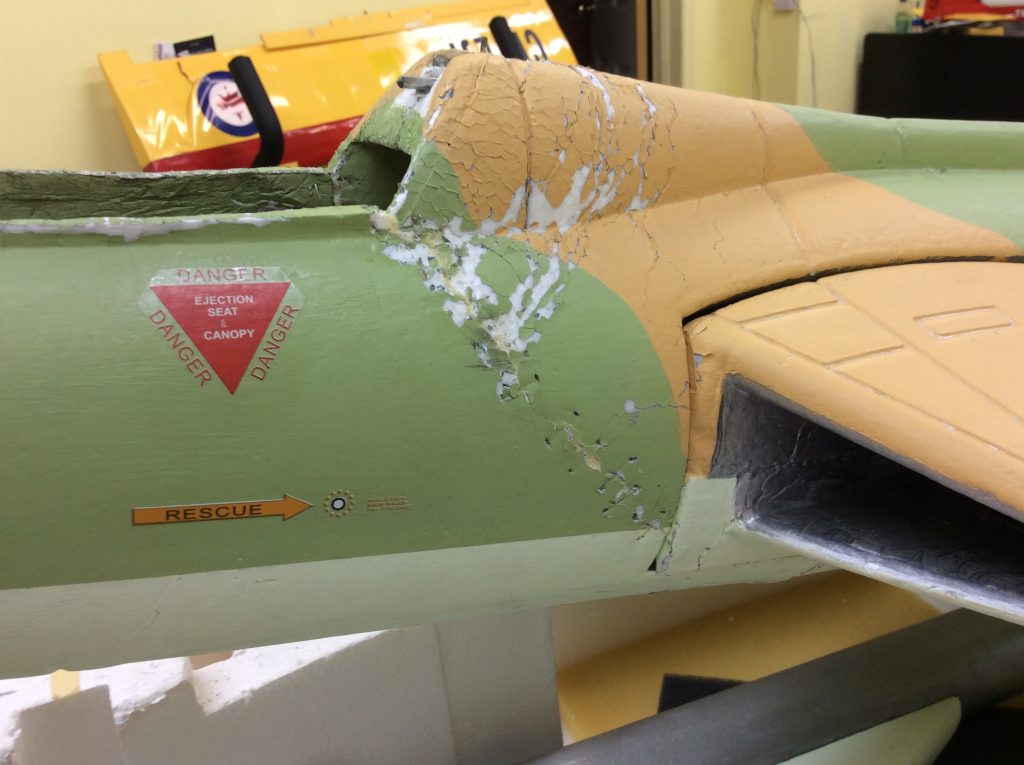 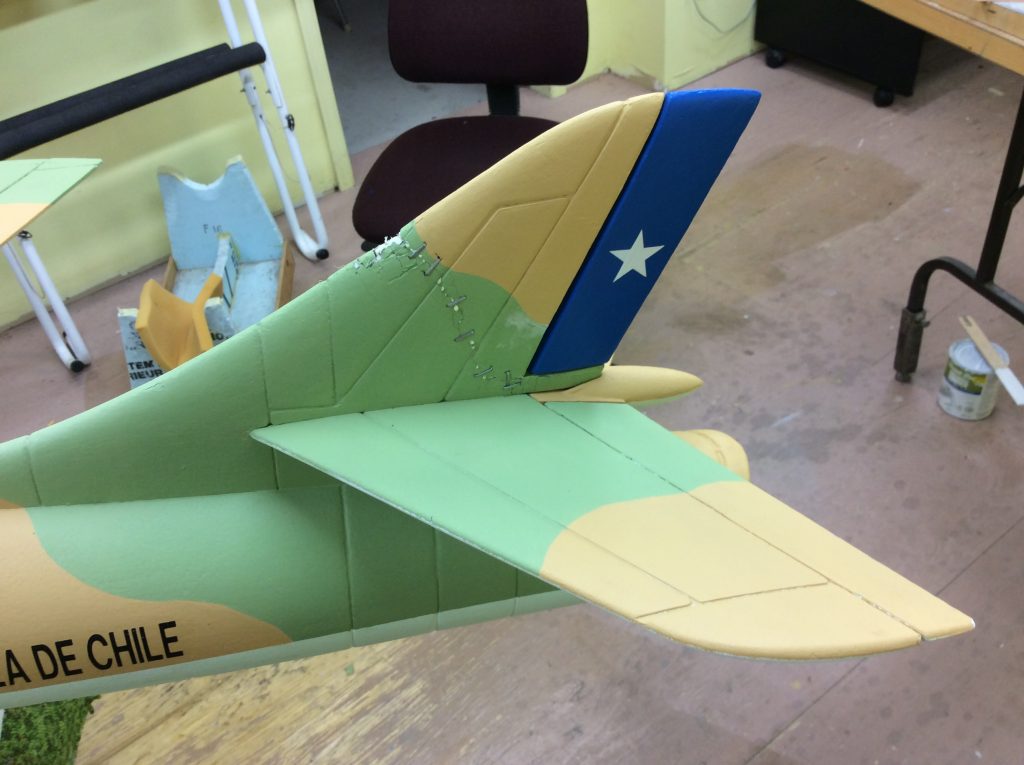 4: Using Gap Lite spackling filler, I fill and sand the repaired areas, then seal the sanded area with Minwax fast drying water based polycrylic.
Finally I paint to match the original colour scheme.

Note: an extra pair of hands sure helps!
P.S. Thanks to Peter Krautter for posting this article and assembling the pictures. 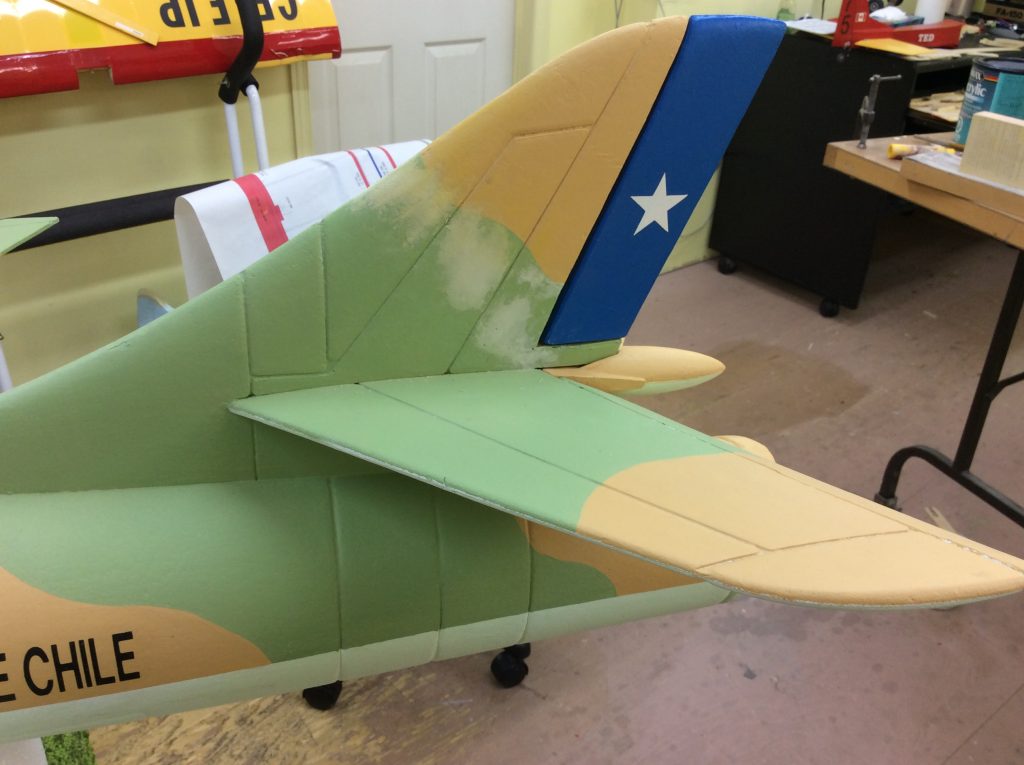 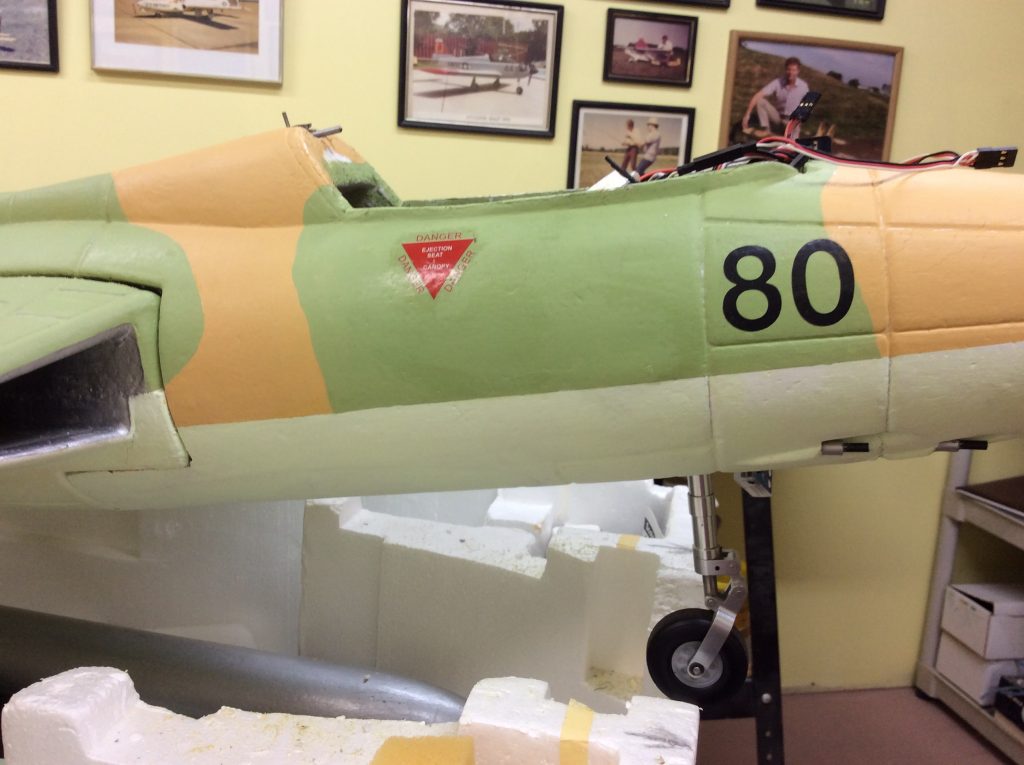 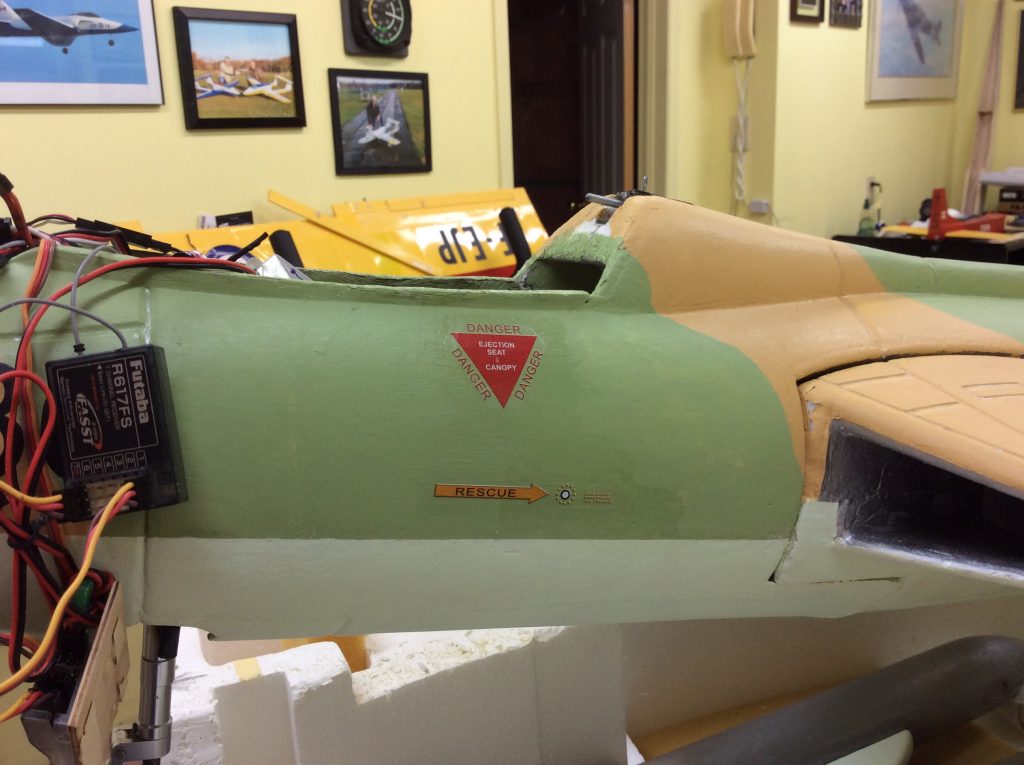 Well I did it again! I thought I wouldn’t buy another jet—but –I just did. Barry Parkinson told me Dan Black had his Freewing Avanti Sport Jet for sale; so I told Dan that I would buy it. Then this happened.

Dan approached me saying I am sorry Ted but Eric Klepsch said that he wanted to buy the Avanti. But since he hadn’t confirmed the sale, I thought he wasn’t interested and this is why I said yes to you and since he asked first, he gets the jet.

So I had a chat with Eric. He said all he wanted is the EDF unit for his F-14 Tomcat and if I still wanted the Avanti, he would install a spare EDF unit and I could pay Dan. So now I am the proud owner of an Avanti Sport Jet.

I initially disliked the look and colour scheme of this jet but hearing Barry rave about flying his Avanti, I have changed my opinion—but not the colour scheme.

I began to read all the posts on RC Groups Avanti thread. I installed all the “mods” that other Avanti owners have made to improve it’s performance. A lot of time was spent re-enforcing and repairing damaged airframe areas including replacing all the broken and scuffed up parts.

Now I had to decide on a new colour scheme. Looking through Callie Graphics website, I chose an all yellow US Navy T-28 Trojan paint scheme. Callie agreed to taylor the decals to fit the shape of the Avanti. This winter project took about eight weeks. Eric has agreed to test fly my new Yellow Bird. As I have gotten older, I am feeling more timid when confronted with the unexpected.

I will close my eyes, ears and ignore my impulses when I hear of another jet for sale. 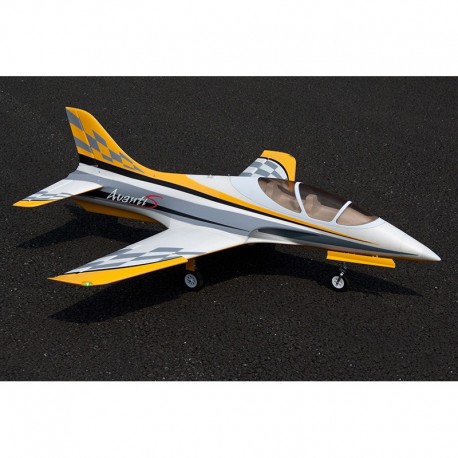 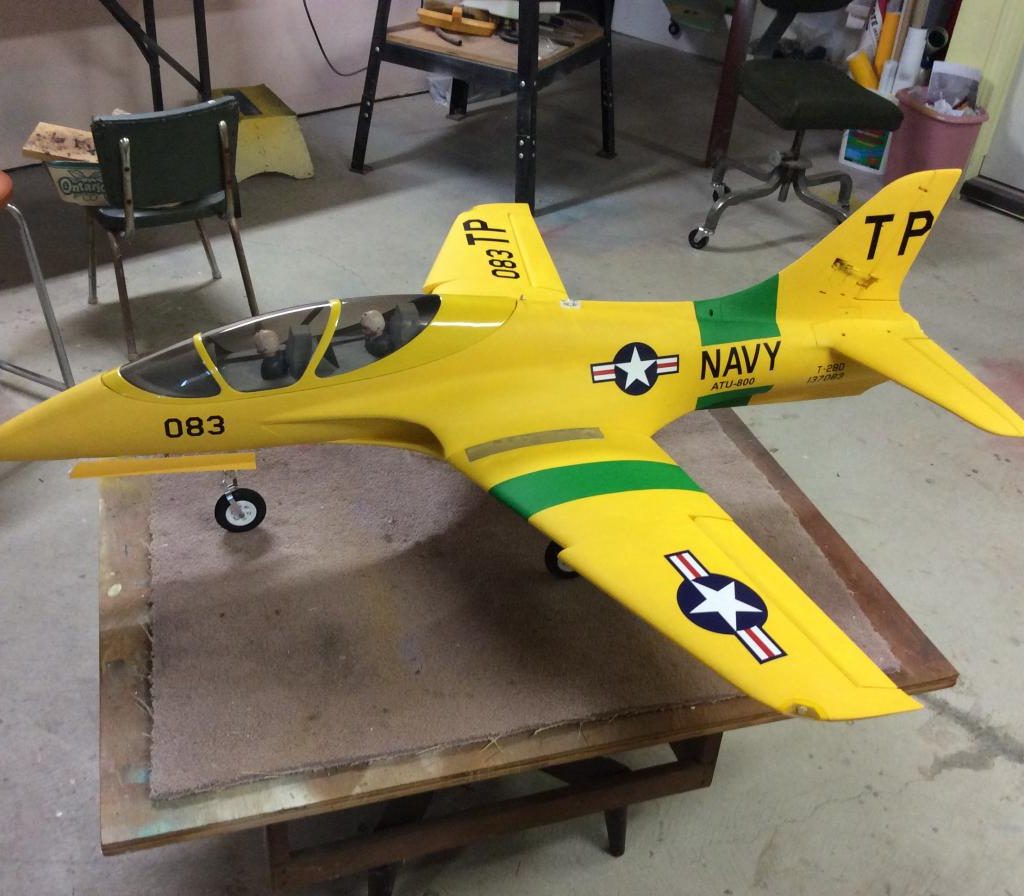 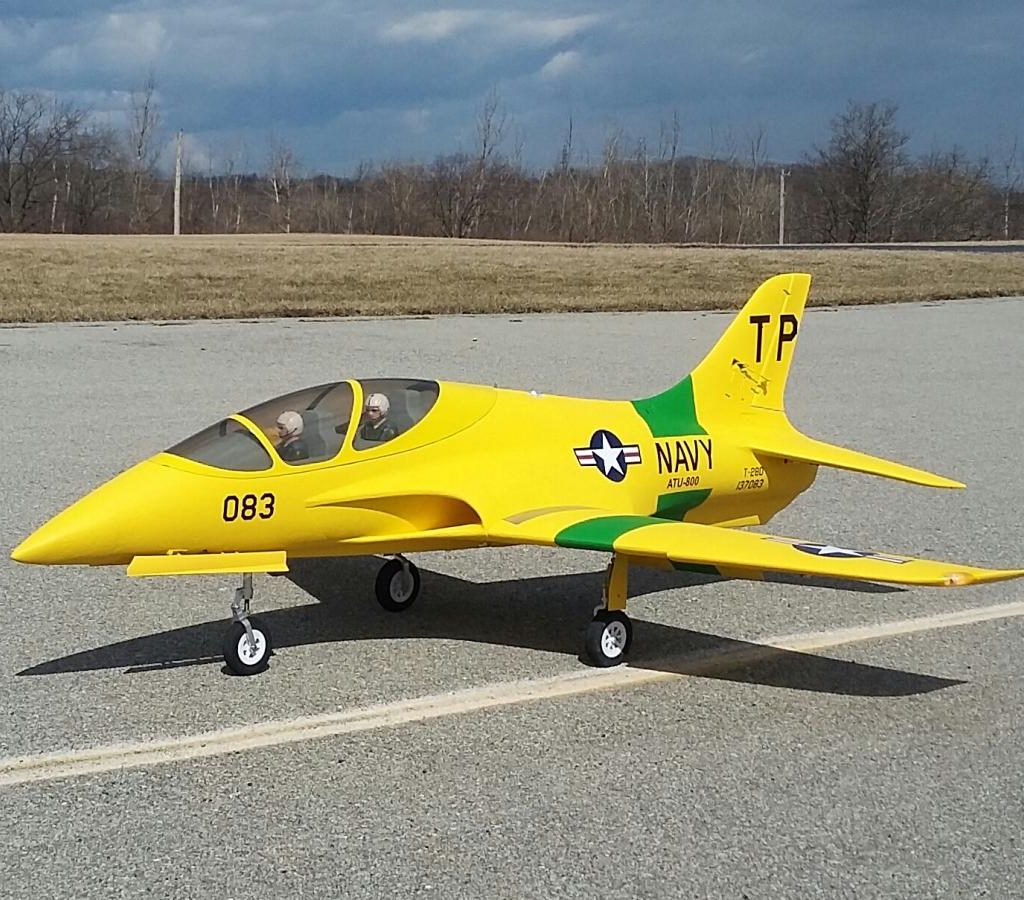 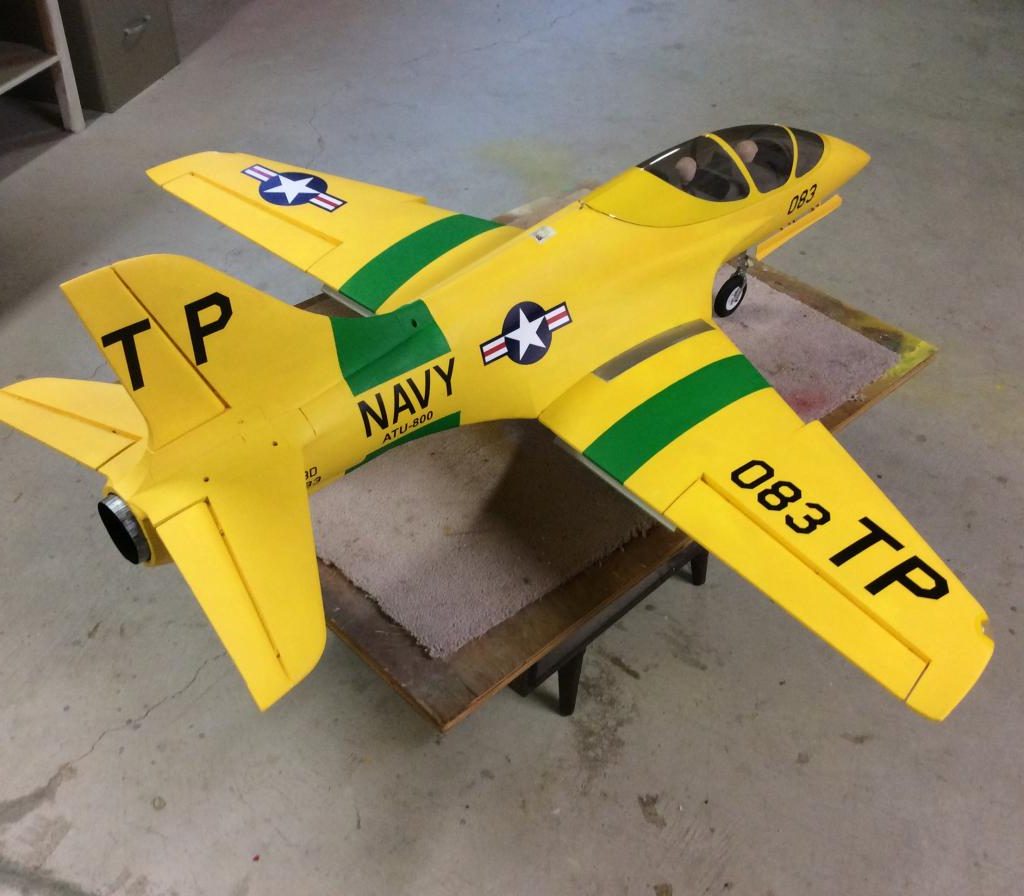 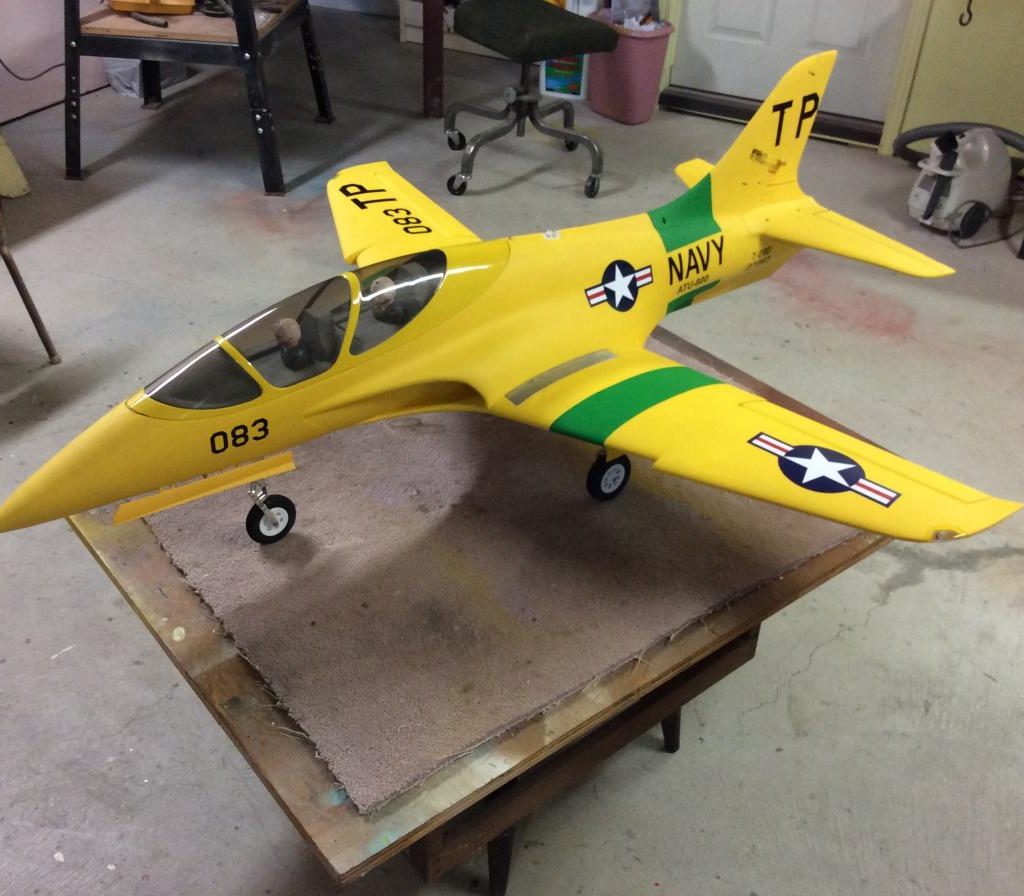 The plans were enlarged 2 times from a set of 52“ control line drawings published in Aeromodeller magazine ( U.K. ) circa 1960.

The wing span will be 104 inches which translates into 1” to 1 ft or 1/12 th scale.
The fuselage on the original plans was made up of balsa blocks and only 8 cross sections shown of which 4 were in the nose to cockpit area. I managed to find other plans but all of the cross sections were a little different. What I have come up with what I think is very close.

The basic fuselage is built on a platform of ¼” ply, which at the widest part is 6” ( bomb bay area ) tapering to 4” at the rear turret. This platform forms the Bomb Bay ceiling. I installed 2- 3/4×3/4” x 48” aluminum angles on each side of this platform to keep it truly flat.

The 1/8th ply fuselage formers are glued in position on top of this platform. I tried to eliminate as much excess wood as possible to keep the weight down.

The 2 bomb bay doors ( each 34” long ) were framed and planked as 1 unit and then cut down the middle to separate them. I built them this way to try to make sure they met up correctly at the centre line. There are 5- ¾” wide hinges on each door with 1 continuous piano wire hinge on each side, this makes it easy to take them off the fuselage if I want to. Individual cotter pins are a pain to install. There are 4 mini Hi Tech servos ( 2 for each door Front and rear ) which work very well now on Channel 5 ( Flaps ) but will have to change later.

The main wing stubs have 3 – 3/4 “ square wing boxes which will accept ¾” square Aluminum tubing, At the present time I have not made up my mind whether to have both port and starboard wings c/w engines completely detachable or have the Inboard engines and stub wings fixed to the fuselage and have the outboard engines and wings detachable. I had a lot of ‘fun’ making sure that these wing boxes were true to the fuselage with at least 6 spirit levels in various positions helping me out.

The tailplane is fairly large with a span of 34” from fin to fin. I am trying to come up with a strong, light means of attaching them to the fuselage but also making them detachable for transportation.. Carbon Fibre rods ( circular or square) are being tried.

I am fortunate that I have a set of drawings showing the geometry of the retracting undercarriage ( 5” dia wheels). The trick is to build it. There is a company out in Vancouver that sells linear electric actuators which I have already contacted, I will need a visit to CWH to take a look at the real Lanc.

I am thinking of using my 4 Saito 82’s as power. I hope to be able to operate all of the functions on the aircraft I.E throttles, flaps, Undercarriage, Ailerons, elevators, rudders, bomb bay doors. I have not figured out a bomb dropping mechanism but I am working on it !!!

Batteries will be as far forward as possible because of the long moment ( 48 “ ) from the C/G to the rear Turret. Even so I think a lot of additional weight is going to be needed to balance the aircraft. 1 thing I have had no experience on is moulding Canopies and gun turrets. This will be a new experience.

I have just enlarged the side view of the Avro York to the same scale as the Lanc. The York uses the same Wings, Engines, Tailplane and undercarriage as the Lanc so building a York fuselage only, I can now have 2 aircraft for the price of 1. The York Fuselage is essentially a square long box not difficult to build.